Terra del Sole is located in the inland of Romagna: behind it are the Tuscany-Romagna Apennines, in front of it the Padana Plain stretches out to the sea.

A Renaissance town centre taking its name from the sun, a fortified “ideal town”: this is Terra del Sole or "Heliopolis" (City of the Sun), a wonderful example of the new urban model developed in Italy in the 16th century, based on the theories and experiences of military engineers.

Conceived as a “town-fortress” and not only as a fortress, this beautiful Renaissance citadel amazes visitors at any time of the year.

Built upon request by the Grand Duke of Tuscany Cosimo I De' Medici, it is one of the very few towns that has a precise foundation date: December 8, 1564.

Specially constructed to protect the border with the Papal State, it still preserves the charm of the town-fortress: enclosed by 13m high walls running for more than 2 km on a rectangular plan, and towered over by two castles: the Castello del Capitano delle Artiglierie built to defend the Florentine village, and the Castello del Governatore defending the Roman village. 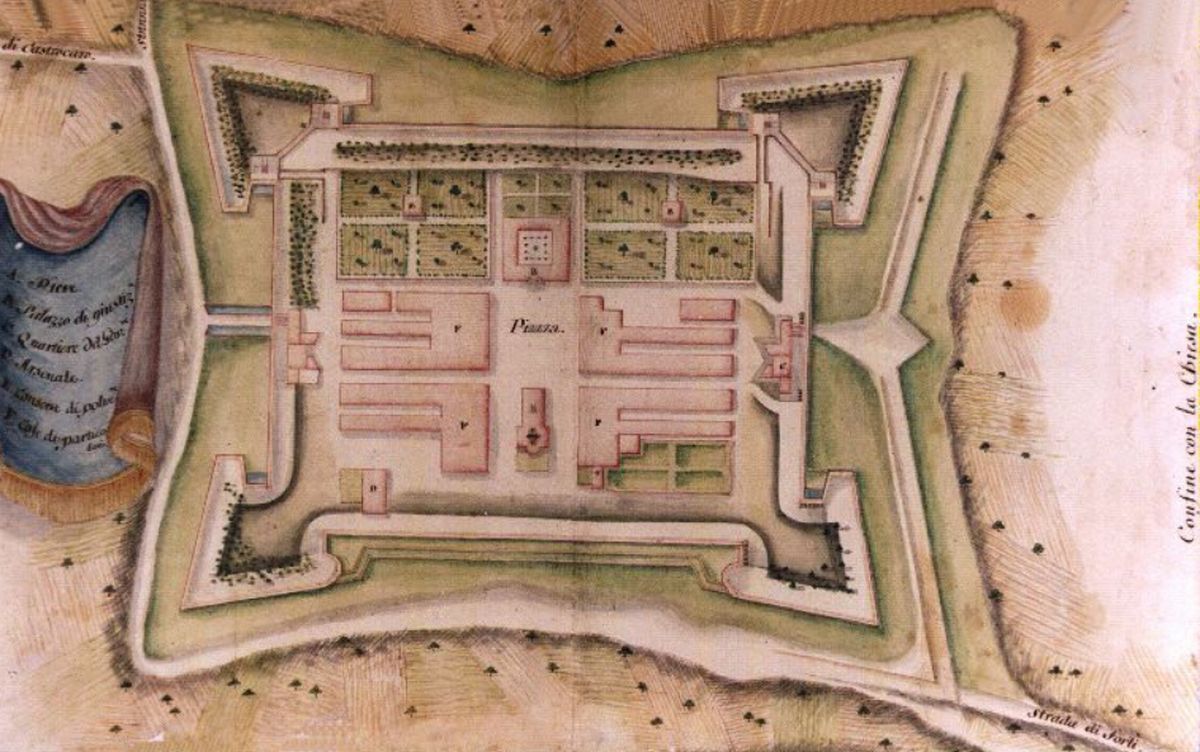 A beautiful example of Renaissance architecture, the main square called Piazza d'Armi, also named Piazza Maggiore, represents the “urban core”, according to the scheme designed by Francesco di Giorgio Martini. The two most important buildings of the town overlook this square: a church – Chiesa di Santa Reparata – and, opposite it, the Praetor’s Palace – Palazzo dei Commissari or Palazzo Pretorio – which identify the two powers governing and ensuring peaceful civil life.

The Praetor’s Palace houses the Museum of Man and the Environment, which explains the citadel’s origin and development. Noteworthy is the room of the criminal court, which is richly decorated with frescoes representing the coats of arms of the Grand Duke’s Commissaries who governed the Tuscany-Romagna province for over two centuries.

On the first Sunday of September, the ‘Palio di Santa Reparata’ is re-enacted, with more than 300 people of the historic districts dressed up in 16th century costumes. The town is transformed: painted districts, palaces and castles decked out with flags, squares enlivened by merchants, salesmen, strolling jesters and the changing of the guard. Parades of representatives of the districts, contestants of old crossbow competitions and tug-of-war, musicians and flag-wavers.

At about 2.5 km from Terra del Sole stands a fortress with the same name as the hill: Rocca di Monte Poggiolo, from which you can enjoy a wonderful view of Romagna down to the Adriatic sea. The first Florentine fortress with a rhomboid-plan designed by Giuliano da Maiano (1471), it lost its importance at the end of the 16th century, after the foundation of Terra del Sole, which, being fortified, was a more suitable defense against full-fledged artillery.

The centre of Terra del Sole naturally continues toward the town of Castrocaro, home of historic baths.